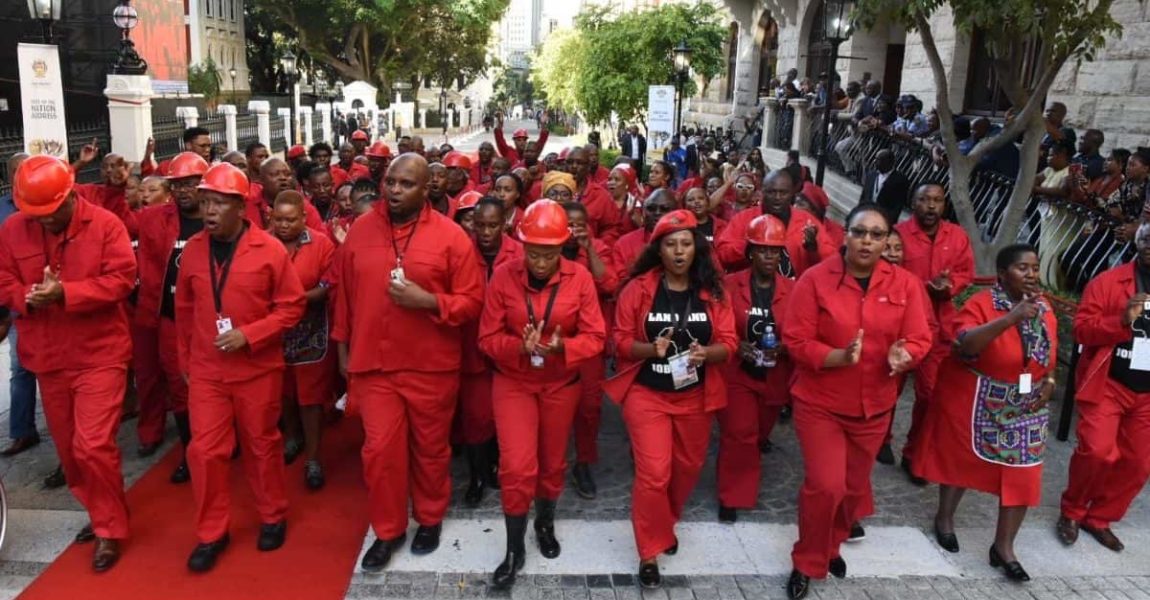 The Economic Freedom Fighters (EFF) have issued a response to the coronavirus pandemic, criticising the government’s handling of confirmed cases.

So far, 24 South Africans have tested positive for the deadly virus, while a further 122 are due back in the country from Wuhan, the Covid-19 epicentre, in the weekend.

The citizens, who have been repatriated from China will, upon landing, be sent for quarantine at Protea Hotel’s The Ranch Resort in Polokwane.

The EFF have slammed this move, suggesting that state quarantine be prioritised for confirmed cases instead of those yet to test positive.

“It is ironic that over 130 South Africans from Wuhan who have been confirmed not to be infected will be under forced, state quarantine. Yet, people who are infected are allowed to ‘self-quarantine’. This shows the inconsistency and absolute incompetence South African government policy on the spread of the virus,” EFF national spokesperson Vuyani Pambo said in a statement.”

The red berets have gone as far as recommending what it sees as suitable sites for state quarantine.

The party named Robben Island – the former maximum-security prison which held political prisoners such as Nelson Mandela – as a possible site to send those infected with the coronavirus.

“It is clear that South Africa does not have a special coronavirus facility to commit the infected persons to. This, Robben Island or a special facility must be immediately identified and prepared for medical care of all persons infected with coronavirus,” he said.

“It is irresponsible and utterly dangerous for the government to allow unmonitored self-quarantine. This did not work in other countries and will obviously not work here. Coronavirus will sweep all over our country with supersonic speed, all because the government lacked the courage to quarantine the infected.”

The novel coronavirus broke out earlier in the year and has since infected close to 150 000 people, with the death toll crossing the 5 000-mark.

South Africa recorded its first confirmed case on 1 March, and the number has risen steadily in the past week.

The EFF cautioned the government against what it deems a lack of action.

The truth of the matter is that our government is already showing signs of failure in curbing this disease and are busy with meetings when this virus is spreading like hell as you mentioned above. Dr. Blade Nzimande is holding a meeting as we speak with the acclaimed stakeholders when the private sector in education is deliberately excluded in such talks. What happened to democracy when we still see discrimination even during the time like this where it is a matter of life and death across the race, colour,creed, origin or gender you name them yet we are serving under the same government in terms of our examination programs. Until today, nothing was ever said with regards to our concerns as private colleges since our exams are starting in the next two weeks from now. Students and parents need answers on what is going to happen when we are not to be larger groups irrespective of the reasons.

How do we access the EFF BOOK CLUB? It is not accessible enough.

I am black American who has visited South Africa on a tourist visa for the last 5 years and made many friends. Of course Africa continues to give priority for permianent visas to rich white people from Europe and America. Disgusting. And the Economic Freedom Fighters with all of your shouting does not have any concrete proposals for helping the poor and working people during this pandemic. I have a friend who is out of work and the Unemployment Insurance which was sustaining him has been disrupted and he has no income and no food and is asking me for help. Where is the provisions to help poor and working clalss black and coloured South Africans survive during this crisis. It is shameful, and I don’t see the Eff making any proposals for relief. Your organization especially should be in the forefront of trying to help these people. But what are you doing besides hollering and screaming and disrupting. I thought you were an alternative to the establishment, but just like here in American you seem to be complicit.